We are now talking about a very interesting mounting kit, cheap but, unfortunately, completely undocumented. There are a few web sites managed by smart radio amateurs that make up for the lack of information while, in my small way, I am publishing some pictures of my assembly, together with some personal comments. This Chinese kit does not suite well to new bees but, if you are quite skilled with SMD components soldering, you can build the amplifier even if you are not an RF electronics specialist.

Almost all of us know that "BAL-UN" is the acronym for "BALanced-UNbalanced", thus we grasp the role of the device that bears the name of "balun" - allow to connect a generator having an unbalanced output (asymmetrical in respect to a reference), as a radiofrequency transmitter with a coaxial transmission line, to a balanced load (symmetrical in respect to the reference), as a dipole antenna or a lot of other kind of antennas, but not a Ground Plane one. The use of a balun let us avoid some drawbacks that would arise if we connected the unbalanced output directly to the balanced input. Actually, a balun is normally bi-directional, i.e. it allows to connect a balanced generator (the same antenna, but now used to receive) to the unbalanced load (the coax connected to the input stage of the receiver), though this function is generally much less promoted in amateur radio literature.

Well, let's come to the point. I've just built a choke bal-un, or current balun (with 1:1 impedance transformation ratio, i.e. it's just a balun, not an impedance adapter). I just want to share the pictures that document my work, I hope that they might be useful to someone else and, why not, that someone  will send me his comments and suggestions trough the "Contacts" module of this web site. Honestly speaking, there is nothing new in this article, it just talks about one of the several (thousands? Millions?) realizations of a HF choke. However, I'm sure that nobody would come to this unknown web site by chance, and that most of you are here because you are looking for instructions and pictures to be used as a starting point to homebrew your balun. So, read my article and also some of the other articles that you'll find around on the internet and in the literature. I spent a lot of effort in order to make a tutorial that suits to individuals who don't have specific technical skills, commenting and showing all the mounting operations, including the trivial ones...

Let's build a wide band choke balun for HF, with a good hope that it'll work on 50 MHz band too. We'll realize it with 11 turns of RG-142 coax cable wound on two overlapped toroids, brand Amidon model FT240-43. Why exactly 11 turns? The choice is based on experimental data published by G3TXQ (SK), who gave the figures for 9 turns; in order to compensate a part of the leakage flux due to the much higher stiffness of the RG-142, when compared to the RG-58 used by G3TXQ, which results in less tight turns around the core, I've decided for 11 turns instead of 9. This balun should withstand a power of few kW, but I would not know how to verify that, I can run only 100W 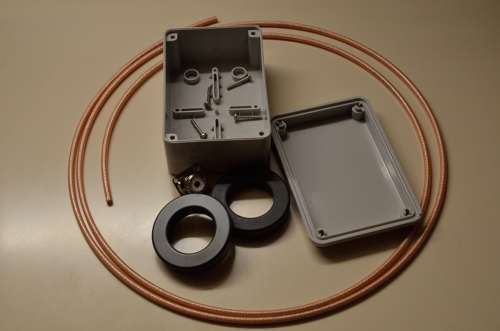 DANGER: HIGH VOLTAGE MAY KILL YOU!

This article is not for beginners. Specific electrical/electronics education is required as well as experience in the field of medium and high voltage circuits..

Observe all suitable precautions and safety rules. If you are wondering what they are, it means that this project is not for you!